Benjamin Anderson, Associate Professor, History of Art and Department of Classics (College of Arts and Sciences) 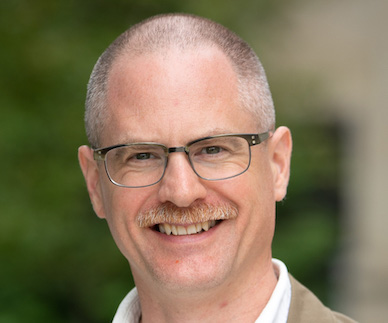 I grew up in Maine and majored in Art and English at Williams. After receiving my PhD from Bryn Mawr in 2012, I came to Cornell as an Assistant Professor in the History of Art. I was promoted to Associate in 2018, at which time I was jointly appointed to the Department of Classics. I am also a member of the graduate fields of Archaeology, Medieval Studies, and Near Eastern Studies.

My primary area of research is the art and architecture of the eastern Mediterranean, ca. 500-1000. My first book, Cosmos and Community in Early Medieval Art (2017), focused on the reception of Greco-Roman technologies for imaging the cosmos in the young Byzantine, Frankish, and Islamic states. I also publish regularly on the urban history of Constantinople (the topic of a 2022 volume, The Byzantine Neighbourhood, which I co-edited with Fotini Kondyli, University of Virginia) and the history of archaeology (as in my 2021 edition of Robert Wood’s account of his visits to Palmyra and Baalbek in 1751). As a member of the Harvard-Cornell Archaeological Exploration of Sardis, I co-lead (with Jordan Pickett, University of Georgia) a multi-year project to document the medieval fortifications of the acropolis.

My professional service has focused on diversity, equity, and inclusion initiatives in the fields of Byzantine studies and Classics, with a particular emphasis on graduate education. As President of the Byzantine Studies Association of North America (2018-20), I led a fundraising drive for microgrants to support URM graduate students. At Cornell, as DGS in Classics (2019-22), I oversaw the design and implementation of a fully funded Bridge MA program. I previously served (2014-17) as an elected, at-large representative to the Faculty Senate.

I live in Belle Sherman with my partner, Dane, and our dog, Bella.

Candidate Statement:
The first priority in nominations and elections should be to build (creative, unexpected) connections across colleges, disciplines, and areas of study, so as to fully activate the self-governing capacities of the university faculty as a whole. Recent initiatives by the Dean of Faculty to increase access to nominations are encouraging and should be expanded, in particular by means of more direct messaging. For context: during my term as President of BSANA, we moved from a model in which outgoing members of the Managing Board recruited friends and colleagues to stand for election, to one in which we wrote directly to our full membership list to request nominations and self-nominations. This model has been a resounding success, resulting in a greater breadth of nominees’ institutional affiliations, career stages, and specializations.
Websites of Interest:
https://arthistory.cornell.edu/benjamin-anderson
https://bunyaminanderson.com/

Roberts served as the Senior Associate Dean for the Social Sciences in Cornell’s College of Arts and Sciences from 2012-2015. He has also served as a department chair, the Director of Cornell’s Latin American and Caribbean Studies program, and the Director of Cornell’s Institute for the Social Sciences. He currently serves on the editorial boards of World Politics and Latin American Politics and Society, and he has held leadership roles in the American Political Science Association and the Latin American Studies Association. He has been a Fulbright scholar at the Universidad Carlos III-Instituto Juan March in Madrid, Spain and the Facultad Latinoamericana de Ciencias Sociales (FLACSO) in Santiago, Chile. He has also been a visiting fellow of the Institute for Advanced Study in Princeton, the Centre on Social Movement Studies at the Scuola Normale Superiore in Florence, Italy, the Stone Center for Latin American Studies at Tulane University, and the Kellogg Institute for International Studies at the University of Notre Dame. His current research projects examine polarization and democracy in contemporary Latin America, and crises of democracy in the global arena.
Candidate Statement:
I have long sought to balance my teaching and research activities with a commitment to service in my department, the university, and the profession at large. I believe faculty can and should play an active role in university governance, and my own experience in administrative positions—as a senior associate dean, center director, program director, and department chair—has repeatedly pressed on me the importance of having an engaged faculty to help shape the university’s academic goals, priorities, and resource allocations. I have been active in a number of inter-disciplinary and cross-college initiatives, and I believe it is imperative that our governing structures provide voice and representation to the full range of academic programs on campus. The Nominations and Elections Committee plays an important role in ensuring that broad representation and identifying strong faculty voices to participate in university governance. I will work to achieve those goals if selected to serve on this committee.
Websites of Interest:
https://government.cornell.edu/kenneth-roberts